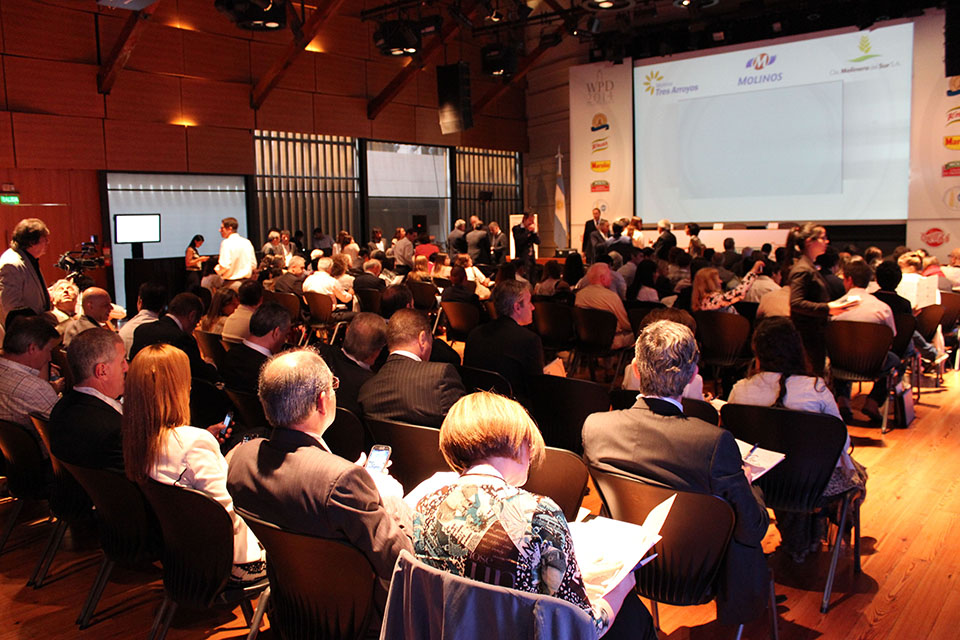 The pasta sector meets in Buenos Aires to celebrate the queen of cuisine: good, healthy and sustainable.

The world’s pasta sector leaders met once again this year, this time in Buenos Aires where the Union of Pasta Manufacturers of the Republic of Argentina (UIFRA), in collaboration with the International Pasta Organisation (IPO), organized the conference entitled  “Pasta: Valor Aggregado para la Nutricion Familiar” (Pasta: Added Value for Family Nutrition).

World Pasta Day is celebrated on October 25 each year and has become a popular, recognized event thanks to the numerous communications initiatives promoted in various countries by associations, pasta manufacturers, restaurants and other businesses and organizations which contribute to creating major visibility to pasta on an international level.

The goal of this initiative, created by a group of sector associations from a number of different countries of the world—the same associations which then decided to found the International Pasta Organisation (IPO) in 2005—is to celebrate pasta and make the media and consumers aware of its nutritional value by explaining that pasta not only satisfies basic alimentary needs, but can also be used in the most advanced experimentation in the culinary field.

Before an audience of over two hundred-fifty attendees, companies from this sector, market and raw materials experts, nutritionists, opinion leaders and chefs, a host of speakers offered presentations about pasta, an age-old food with a rich, long history—including in Argentina—that has become an established part of the diets in many countries.

The underlying theme of the day was making the most of pasta from the standpoint of taste, its nutritional properties and the fact that it is a sustainable food from an environmental and economic point-of-view.

The conference sessions were preceded by the Annual General Assembly of the IPO which ratified the appointment of its new president, Riccardo Felicetti, former president of the Pasta Group of AIDEPI.

As a result, an Italian pasta manufacturer will be at the head of IPO for 2015, during the Milan EXPO, where the IPO has also delegated to AIDEPI the organization of the 5th World Pasta Congress which, every five years, brings together the leaders of the world’s pasta industry. The World Pasta Congress and the celebrations for World Pasta Day 2015 will, in fact, take place at EXPO, in complete harmony with the overall theme of the event: “Feeding the Planet, Energy for Life”.

The general assembly of the IPO also voted to launch an international advertising campaign aimed at promoting the strengths of pasta from a nutritional standpoint as a response to the rampant spread of low-carb, no-carb and gluten-free diets. In order to reaffirm the healthy properties of carbohydrates and pasta in particular, at the next World Pasta Congress the Scientific Advisory Committee of the IPO, comprised of 25 experts from 17 countries, will meet to review the most recent scientific findings and update the Scientific Consensus Statement previously signed in 2010 in Rio de Janeiro during the previous World Congress.

The conference proceedings were opened by the welcoming remarks of Carlos Airoldes and Fabian Menichelli, respectively president and vice-president of UIFRA, who also read a papal blessing from Pope Francesco Bergoglio. Other speakers included Daniel Funes de Rioja, president of the Food Industry Federation of Argentina (COPAL) and the under-secretary of the Ministry of Agriculture, Oscar Solis.

Argentina has a long-standing tradition of pasta production dating from as early as the second half of the 1800s. According to some sources, in 1860 there were already ten producers in the province of Buenos Aires alone. UIFRA, which has represented national pasta manufacturers since 1993, was born of the merger between the Federación de Industriales Fideeros de la República Argentina, founded in 1973, and the Cámara de Industriales Fideeros de Buenos Aires, originally the Cámara Gremial de Fideeros, founded back in 1901.

This country’s tie to pasta is clear and testified to by the approximately 50 manufacturers who met in Buenos Aires to celebrate World Pasta Day, honored to have been invited by the IPO to organize the event. [hidepost]

During the day, numerous experts in the various sectors made presentations, but the central theme was unquestionably nutrition.

Sara Baer-Sinnott (Oldways, Boston) moderated the session on Pasta & Health: Debunking Myths and before introducing the speakers, she unveiled the new webinar “Pasta: A Unique Grain Food”, an online seminar created in collaboration with the IPO and the involvement of three members of the IPO Scientific Advisory Committee: Prof.  Gabriele Riccardi (Univ. Federico II, Naples), Dr Kantha Shelke (Chicago) and Prof. Marta Gaurelet Aza (Univ. Murcia, Spain). The webinar, already available on IPO and OLDWAYS websites, has been designed as a useful learning and informational tool for the media and operators in the food education and nutrition sector, as well as consumers themselves. It meets the demand for clear and, above all, scientifically-reliable information increasingly required by the sector to combat the growing spread of misleading and sensationalist information which, in turn, contributes to the spread of erroneous eating habits and beliefs among consumers on an international level.

Three leading experts in the field of research and nutrition—Prof. Sergio Britos (University of Buenos Aires), Prof. Cyril Kendall (University of Toronto) and Prof. Alberto Cormillot (Universidad Isalud, Buenos Aires)—were called upon to present the results of the most recent studies involving the glycemic index and the Scientific Consensus Statement on Pasta approved in Rio de Janeiro in 2010 to debunk the many false myths and stereotypes regarding pasta to reaffirm its validity from a nutritional standpoint, even in those following a low-calorie diet, if consumed in the proper quantity and with a balanced sauce.

Diego del Pozo Mitschele, from the Kantar WorldPanel research firm, examined trends in pasta consumption in Argentina, highlighting the positive trend and excellent opportunities for further development in this market, especially in terms of semolina pasta. Pasta penetration in general is very high: over 80% of Argentine consumers buy at least 3 packages of pasta every two weeks.

Discussing the characteristics of pasta from the standpoint of sustainability was Luca Ruini, engineer and Health, Safety, Environment & Energy Director of Barilla, who demonstrated, based on research studies, that pasta is not only good and a valuable ally for our health, but is also good for the environment while also being economically cost-effective.

In fact, few foods can boast a “sustainability index” as high as that of pasta. Through analysis of the product life cycle, it can be seen that, from the field to the table, the ecological footprint of pasta is truly low.  In other words, eating a plate of pasta means choosing a food product that fully respects the environment. And not only. Contrary to what one might expect, scientific studies have shown that it is absolutely not true that following a diet based on healthier foods is more expensive.

To conclude the day’s presentations on a gastronomic note, the well-known Argentine chef and TV host Juan Braceli offered a real, live cooking show, preparing three pasta dishes before the eyes of attendees.

The conference ended with the closing remarks of Robert Bauza, a long-time member of UIFRA, and IPO president Claudio Zañao.

The latter, in providing a brief summary of IPO history and projects for the future, underscored the importance of being able to count on an increasingly greater number of members in order to be able to pursue the direction that has been embarked upon with greater impetus and incisiveness, and to continue to defend and promote pasta’s image throughout the world.

The next meeting of international pasta manufacturers will be on October 25, 2015 at Milan EXPO, for three days dedicated to pasta, the ideal source of Energy for Life. [/hidepost]

An interview with Mr Carlos Airoldes, President of UIFRA
Combined Pastation pasta, the pasta factory mini “All in one”