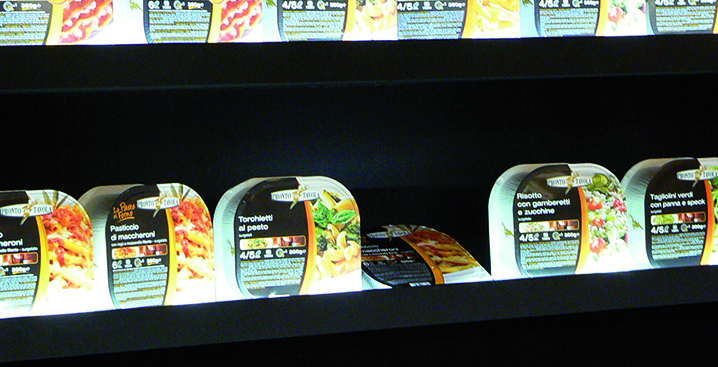 The quantification and understanding of the chemical-physical changes that affect the various phases of ready-to-eat meals during storage is a real challenge for researchers in this sector. Seeking to understand the mechanisms involved at the various structural levels and providing scientific evidence for the phenomena that come into play becomes necessary and fundamental, since such knowledge makes it possible to intervene in an intelligent manner on the formulation and/or production process of these products, in order to increase their quality and prolong their shelf-life.

Pasta is a very well-known Italian food and its consumption is widespread throughout the world. Over the past ten years, the production of pasta has increased at a global level, from 7 to 12,000,000 tons/year, as a result of the proliferation of pasta dishes served in fast food eateries and similar restaurants.

Ready meals, or convenience foods, or ready-to-eat dishes now account for a major segment of the global food market and their importance is destined to grow. These foods, in fact, all possess important common characteristics that make them extremely appreciated by the consumer: they are easy to eat, they have a very short preparation time and they do not require any further “domestic” processing.

The international market offers a wide range of ready-to-eat pasta meals, created to suit cultural habits and local traditions.  The majority of the dishes available on the market are products that are refrigerated, deep-frozen and shelf-stable (because previously subjected to a stabilisation process) and in general, prior to consumption, they require heating in a microwave or conventional oven.

The food industry has added – and is endeavouring to add more – services to these types of products, both by developing new formulations which may be considered “healthier” (e.g. products for vegetarians, the use of wholemeal flour, low salt content), and by striving to increase the service aspect even further (by reducing pre-consumption time, by developing ready meals-to-go that workers can eat at their desks).

Ready-to-eat pasta meals are generally produced through the cooking of a “pasta” phase and a “sauce” phase. During the process, these two phases can be either assembled, or separate. The product is then subjected to a stabilisation process which can be, as already mentioned, of various types and act, either simultaneously or otherwise, as a cooking process.

The coexistence of the two physical phases – pasta and sauce – each with extremely different water, composition and texture parameters, and the changes to which they are subject during storage, make these foods “dynamic” products. Their quality does, in fact, change in a negative manner over time because, first and foremost, structural texture changes are observable, a fact that decreases consumer acceptability. Ready-to-eat pasta meals are characterised, not only by the presence of a high water content (being cooked products), but also by moisture gradients between the various phases of the product which make them unstable and subject to modification. Macroscopic water migration between the pasta and sauce, redistribution of water at a molecular level between the various components such as gluten, starch and other solutes, together with structural phase changes (recrystallisation of amylopectin) are some of the phenomena that contribute to the “ageing” of these products. The quantification and understanding of the chemical-physical changes that affect the various phases of products during storage is a real challenge for researchers in this sector. Seeking to understand the mechanisms involved at the various structural levels and providing scientific evidence for the phenomena that come into play become necessary and fundamental, since such knowledge makes it possible to intervene in an intelligent manner on the formulation and/or production process of these products, in order to increase their quality and prolong their shelf-life.

The purpose of this article is to review some recent scientific literature publications reporting studies on the chemical-physical changes in ready-to-eat pasta meals during storage.

Out of all the stabilisation processes available, deep-freezing is acknowledged to be an excellent method for preserving the quality characteristics of foodstuffs. In 2009, Olivera and Salvadori published the results attesting to the effect of two different freezing times (18 min and 68 min) on given characteristics of already cooked tagliatelle. The following aspects were measured: texture parameters (Texture Analyzer, test TPA, cylindrical aluminium probe P/25) of each individual strand of the tagliatelle, rheological parameters (Rheometer equipped with a parallel-plate sensor PP35/S) such as G’, G’’ and tan ? (elasticity, viscosity and complex behaviour indices, respectively) and sensory parameters (acceptability test with a panel of 30 semi-trained tasters). The results confirmed that both freezing times caused structural damage to properties such as elasticity, hardness and water holding capacity. But fast freezing altered these parameters to a lesser degree. A direct relation has, moreover, been observed between freezing speed and the texture parameters measured. The results of the sensory analysis, on the other hand, demonstrated that the tagliatelle subjected to slow freezing scored lower on flavour and texture, and this had a negative effect on their overall acceptability. Moreover, these parameters were found to be in line with the variations measured instrumentally. In 2011, the same authors (Olivera and Salvadori 2011) published another paper regarding a series of quality attributes such as texture, colour, rheological properties and sensory acceptability of cooked and frozen tagliatelle (using a fast and a slow freezing process) during a 12-month storage period. The water content was found to decrease significantly in the first 4 months of storage, irrespective of the freezing technology applied and, on average, after 12 months a 6% water loss was observed.  The hardness measured decreased in the first two months, after which it remained constant up until the end of the storage period. Additionally, the “less damaging” effect on the product of the fast freezing process only lasted for the first 2 months.

As far as the sensory analysis is concerned, the appearance attribute (connected with surface colour) decreased between the second and fourth month and between the eighth and tenth month of storage. The surface colour became lighter over time, a change that the panellists appeared not to appreciate, since the product was made with wholemeal flour. Another detail emerging from the sensory analysis was that the advantages gained through the slow freezing process “petered out” after the first few months. Last but not least, in this study shelf-life kinetics were calculated with the aid of both instrumental and sensory hardness parameters. From these kinetics, a shelf-life of 3.6 and 3.8 months emerged (for fast and slow freezing, respectively).

A team of researchers from the University of Parma (Carini, Curti, Littardi, Luzzini, & Vittadini, 2013) studied a ready-to-eat pasta meal, namely  “fusilli all’arrabbiata”, stable at ambient temperatures for a storage period of 34 days. These meals (fusilli 75% and sauce 25%) were produced by simultaneous cooking and sterilisation using microwave technology. The texture parameters of the products were then measured (Texture Analyzer, Kramer Shear Cell on the two assembled phases), together with other parameters useful for describing the water status. The water status and its dynamics during storage were studied considering water content, water activity and molecular mobility of protons (using low resolution Nuclear Magnetic Resonance Imaging), an index useful for describing water dynamics at a molecular level. The macroscopic structure (hardness) of the pasta gradually lost its hardness over time. The changes in the water content and water activity (of the two separate phases) over time did not show any water migration between the two phases. Proton molecular mobility indicated that the sauce phase had undergone greater changes than the pasta phase during storage (decrease in mobility). On the basis of the results obtained by measuring the longitudinal relaxation time T1 (an experiment performed using the Nuclear Magnetic Resonance Imaging technique), the authors conjectured a migration of water between the two phases at a molecular level.

In conclusion, from these papers it may be seen that the quality of this type of products decreases over time and this is also perceived by the consumer. It should be noted that in most cases these products require heating at home before being consumed, a process which could partially “restore” the organoleptic characteristics that the product possessed at the start of storage. However, considering that the production of ready-to-eat pasta meals that can be consumed without requiring any further processing by the consumer is an up-and-coming trend, researchers’ interest should also be focused on the study of these products in order to improve their quality and prolong their shelf-life.

Unity is strength: what Associations do to promote pasta manufacturers