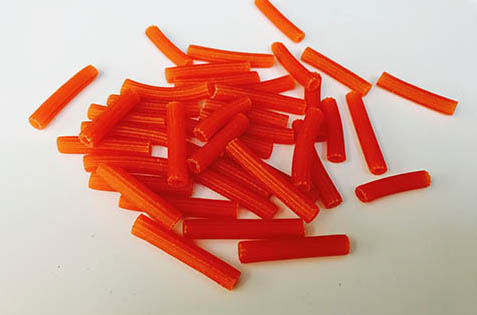 The use of legume flour into pasta is an innovative and practical solution to increase legume and vegetable-based protein consumption. Few pasta companies in the world now produce pasta products made of 100% pulses. Although their availability on the shelves is still very limited, their popularity is growing fast.

The 2016 was the international year of pulses with the FAO campaign entitled “Pulses: nutritious seeds for a sustainable future”. Along with the early cereal grains, pulses were among the first crops cultivated as far back as 11,000 years ago (Caracuta et al, 2015). Pulses are crops belonging to the Leguminosae family that are harvested exclusively for the dry seed. Dried beans, lentils, chickpeas and peas are the most commonly known and consumed pulses. Leguminosae which are harvested green (i.e. green peas and green beans) are not included but are classified as vegetables; their nutrient compositions indeed is more similar to that of vegetables than pulses. Other Leguminosae mainly used for oil extraction, such as soybean and groundnuts, and those used solely for sowing purposes, like clover and alfalfa, are excluded as well (FAO, 2016). Staple dishes from across the world include pulses, from hummus in the Mediterranean and falafel in the Middle East (chickpeas), to the Italian pasta e fagioli soup or a traditional English breakfast (cannellini and navy beans), Indian Dal and Dal Bhat in Nepal (yellow lentils), to cite only a few. The major groups and pulse varieties are described in Table 1 (download the magazine). Pulses are excellent sources of protein. They are low in fat and excellent sources of dietary fiber and micronutrients, such as iron, zinc, potassium and folate. They are recommended by health organizations for the management of non-communicable diseases like diabetes and heart conditions. Their low fat content and the interaction of their sterols have been proven effective at maintaining low LDL cholesterol levels and reducing blood pressure (FAO, 2016). Because pulses have a similar nutrient profile to foods in both the protein foods group and the vegetable group, they can be counted as a vegetable or a protein food to meet reference intakes (Dietary Guidelines Advisory Committee, 2015). Pulses represent an ideal source of protein particularly in regions where meat and dairy are not physically or economically accessible. Plant-based protein sources (mainly represented by pulses) shall be preferred to animal proteins for sustainability reasons. Animals are neither sustainable nor efficient converters of the energy they consume. The global livestock sector represents the 14.5 percent of anthropogenic GHG emissions, playing an important role in climate change (FAO, 2013). For healthy living, it is recommended to consume more fruits, vegetable and plant protein sources, while limiting meat to about 500 g/week, and to consume moderate levels of other animal products (Larsson and Orsini, 2014; Pan et al, 2012; World Cancer Research Fund, 2007). A protein intake with a ratio of 1:1 plant vs animal source is recommended by the UN (Chardigny and Walrand, 2016), but in western countries the population consumes more animal than plant proteins. In farmlands, pulses fix atmospheric nitrogen in the soil naturally, and in some cases free soil-bound phosphorous, thus improving soil fertility and significantly decreasing the need for synthetic fertilizers. Reducing dependence on the synthetic fertilizers can contribute to climate change mitigation (FAO, 2016). By using pulses for intercropping and cover crops, farmers can also promote farm biodiversity and soil biodiversity, while keeping harmful pests and diseases low. In the organic farming system, intercropping is compulsory and leguminosae are applied in most cases (REGULATION (EC) N. 834/2007).

For all these reasons, pulses have been and are the topic of calls for funding at National and EU research programs. Some major recent EU research and innovation projects on pulses are listed in Table 2 (download the magazine).

Mass production of pulses is localized in developing countries. India is the world’s largest producer and importer of pulses (FAO, 2016). As of 2015, the world’s biggest producers of pulses were India, Canada, Myanmar, China, Nigeria, Brazil, Australia, USA, Russia, and Tanzania, while the world’s most important pulse exporters also include Argentina, France, Ethiopia, and Turkey. Pulse producing countries are found in every continent. [hidepost]

The use of legume flour into pasta is an innovative and practical solution to increase legume and vegetable-based protein consumption. Few pasta companies in the world now produce pasta products made of 100% pulses. Although their availability on the shelves is still very limited, at least in Italy, their popularity is growing fast. In the second half of 2016 legume pasta started to appear in Italian modern distribution retail stores and yellow lentils spaghetti by Probios were selected as innovative product at SIAL Innovation, the International Food Fair in Paris (Figure 1, download the magazine).

One portion of legume pasta provides nearly double the protein and at least double the total dietary fiber than regular semolina pasta whereas carbohydrates are lower (about 51-60 g against 72-75 g in 100 g of product). Since they provide many proteins, it is recommended to reduce the serving to 65-70 grams.

Pasta is made mostly from precooked pulse flour, which is then mixed with water, extruded and dried; pulses are de-hulled depending on the species. Pulses used for pasta making are green pea, yellow and red lentils, white chickpeas, and black and navy beans.

Legume pasta is gluten free and has a low glycemic index (GI). In fact, pulses are slowly digested (www.glycemicindex.com). Pulse ingredients are used to develop low GI food products (Fujiwara et al, 2016). Although also food processing affects the postprandial glucose response (Scazzina et al, 2015; Marti et al, 2013), several intrinsic features of legumes are responsible for the low GI. Legume starches are richer in amylose (30% to 37%, Hoover and Sosulski, 1985) than cereal starches (18% to 33% of amylose, Buleon et al, 1998). A higher amylose:amylopectin ratio translates into a higher tendency to retrograde after the gelatinization-cooling steps and to form a structure that is resistant to digestive enzymes (Brijesh et al, 2012; Petitot et al, 2009). In addition, the quantity of proteins and fiber and the presence of anti-nutritional factors such as phytic acid (which could inhibit ?-amylase activity thus affecting the rate of starch digestion) play a role (Sandhu et al, 2008; Thompson et al, 1984; Deshpande et al, 1984).

Laleg and colleagues studied the rheological, cooking, and nutritional properties of three pasta products made from faba, lentil and black mung bean flours and compared them with commercial gluten-free pasta composed of a mixture of maize, millet, rice flours and cane sugar syrup. Whatever the legume used the cooking and rheological properties of pasta, its microscopic structure and the strength of its protein network differed from that of gluten-free cereal pasta. Legume pastas showed a weaker texture with low springiness scores but lost less material during cooking (Laleg et al., 2016).

By a better understanding of the biochemistry of pulse species and by adapting the current processes, more and more attractive food products will be obtained from pulses. Legume pasta is an example of nutritious food for a sustainable future (healing FAO campaign definition), an example of how the food industry could offer healthy and sustainable food. [/hidepost]