The Pastaria network is growing and its community is expanding

Once again, Pastaria numbers are on the rise. Pastaria.it remains an important online reference for professional information with over 29,000 sessions, 22,000 users and 67,000 page views. The number of registered users has grown to 962, and its tabloid continues to have a wide distribution, with 37,200 complementary copies given out at major sector trade fairs in Italy and abroad. Also good the performance of digital publications, with over 9,300 downloads. An excellent start for Pastaria Hub and Pastabid, and there is a significant rise in the number of companies providing support to Pastaria for 2016.

Pastaria is ringing out 2015 with a balance that is unquestionably positive from a number of standpoints. First of all, because in the year just-ended, the Pastaria network has been enriched with two new tools for sector operators which are the two portals: Pastabid, an online platform that allows pasta makers to introduce themselves, receive requests from international buyers and take part in supply contract bids (see Pastabid, the global marketplace for pasta is here, in Pastaria International 4/2015); and Pastaria Hub, the portal dedicated to technologies, ingredients and services for pasta production (see Pastaria Hub, technologies, ingredients and services for pasta manufacturers, published in Pastaria International 5/2015), , both of which are generating considerable attention, support and major interest. Also, because September saw the kick-off in the province of Venice of the Pastaria tour (see Venice, 25 September 2015: start of the Pastaria tour, in Pastaria International 5/2015), which involves a series of open meetings dedicated to providing information and professional updates for those in the sector, and these encounters are scheduled to continue during the coming year.Also in 2015, our publication was, for the first time and exclusively, the official media partner for the prestigious World Pasta Day & Congress held in Milan from October 25 to 27. For complete coverage, see World Pasta Day & Congress: the world of pasta looks to the future, published in Pastaria International 6/2015. And, finally, certifying Pastaria’s growth are the numbers we provide below.

Pastaria.it is increasingly the informational reference point on the Net for pasta makers looking to remain up-to-date. The Google Analytics report on access data to the portal for the period January 1 to December 31, 2015, shows an increase in all major indices, thus confirming the uninterrupted growth trend.

The geographical areas of the visitors also broadened, with the number of countries increasing over the year from 127 to 153 and among the new entries were Somalia, Zimbabwe, Turkmenistan, Swaziland, São Tomé and Príncipe, Nepal, the Maldives, Mauritius, St. Vincent and the Grenadines, Mali, Cambodia, Jamaica, and Guadalupe.

Also good the performance of registrations to Pastaria.it which brought the portal community to 972 (as of December 31).

Registered users, it should be remembered, have free access to the archive of back issues, can download pdf files of the magazines published since 2007, receive our newsletters and, using the special form, can submit press releases, news, product presentations and other information to our editorial staff which will evaluate their use on both the portal and in the printed publications. To register on Pastaria, click on this link.

Providing a boost to pastaria.it visits were undoubtedly the Pastaria channels on the leading social networks, such as Facebook and Twitter. They play an important role in continuously relaunching the articles published on pastaria.it while, at the same time, providing sponsors with potentially unlimited visibility. 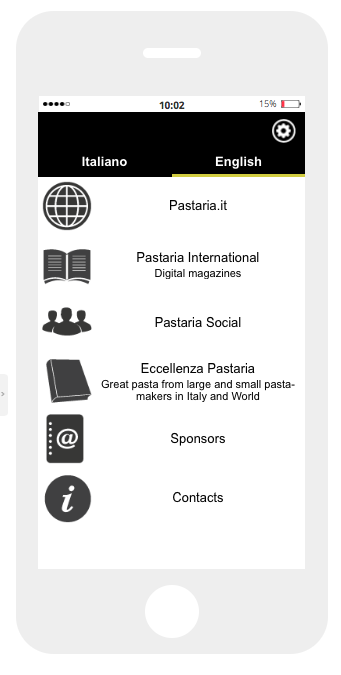 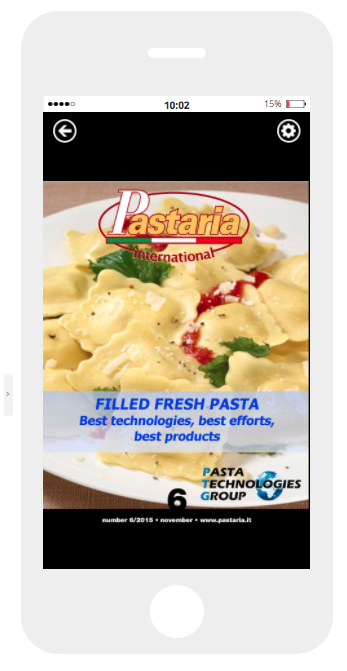 The Pastaria app is becoming increasingly popular and has proven itself to be a quick, easy-to-use tool for accessing content and services from mobile devices. Since April 2013, when the app was published, there have been a total of 1,954 installations. The app, in Italian and English, is 100% free-of-charge and is available from the iTunes store and Google Play. The application makes it possible, among other things, to read the issues of the digital magazine for the current year, consult the directory of suppliers who are leaders in technologies, ingredients and services (and they can be contacted via telephone or e-mail or by simply clicking on the link), navigate through the pastaria.it website and receive our push notifications. We are currently working on a new version of the app which will offer important new options and will be published during the first half of this year.

In 2015, 37,200 complimentary copies of Pastaria Quick News (in Italian) and Pastaria International Quick News (in English) were printed and distributed. These bimonthly tabloid publications provide the latest news and updates for sector professionals and are sent to around 6,000 pasta makers, both in Italy (27,600 copies) and internationally (9,600 copies to 104 countries), representing a unique and extremely widespread distribution among the international pasta-producing sector. Over the course of 2015, the tabloids were also distributed at the Pastaria stand during Tuttofood (Milan, May 3-6), Ipack-Ima (Milan, May 19-23) and the World Pasta Day & Congress (Milan, October 25-27). To receive, free-of-charge the print tabloid, reserved exclusively for sector operators, just register on the pastaria.it website.

Also positive the performance of the digital publications released in 2015 with a total of 8,187 downloads (as of December 31, 2015, but this figure will certainly grow over coming months), without forgetting the other reading options, such as the Pastaria app. If this figure is added to that of the digital publications downloaded over the two-year period 2013-2014, the total is 44,438.

The digital magazines are available in Italian and English, are free-of-charge, multimedial, interactive, can be shared on social networks, and are issued bimonthly (in odd-numbered months). 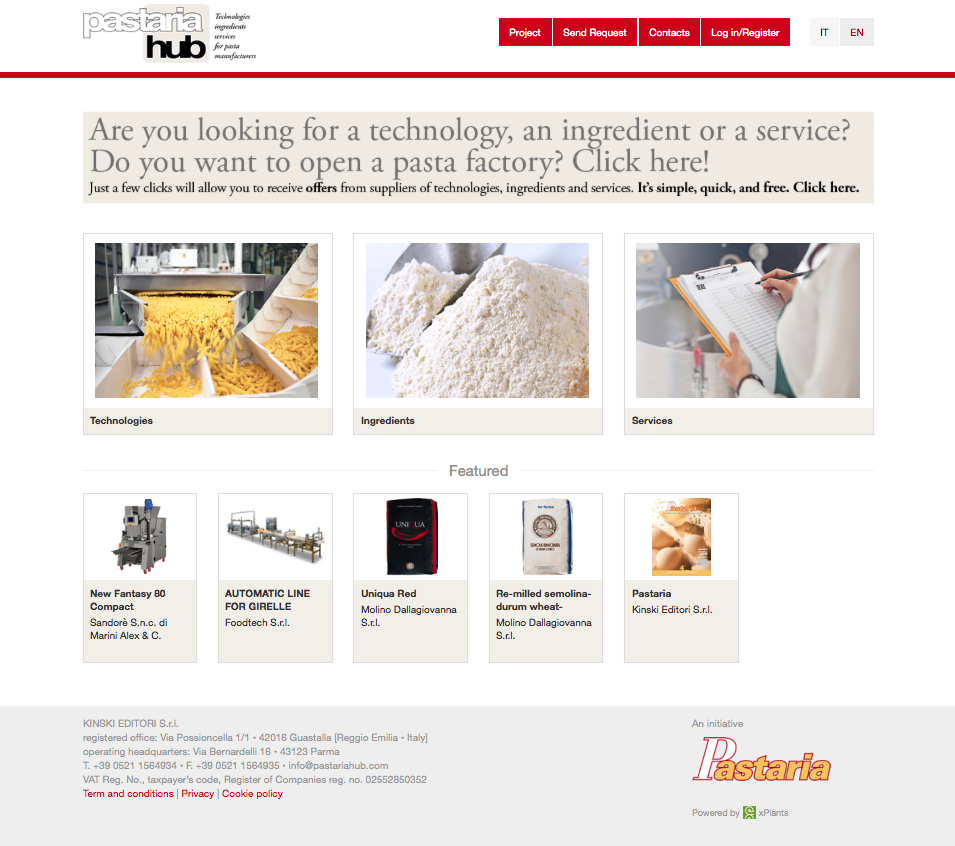 Pastabid, the global marketplace for pasta 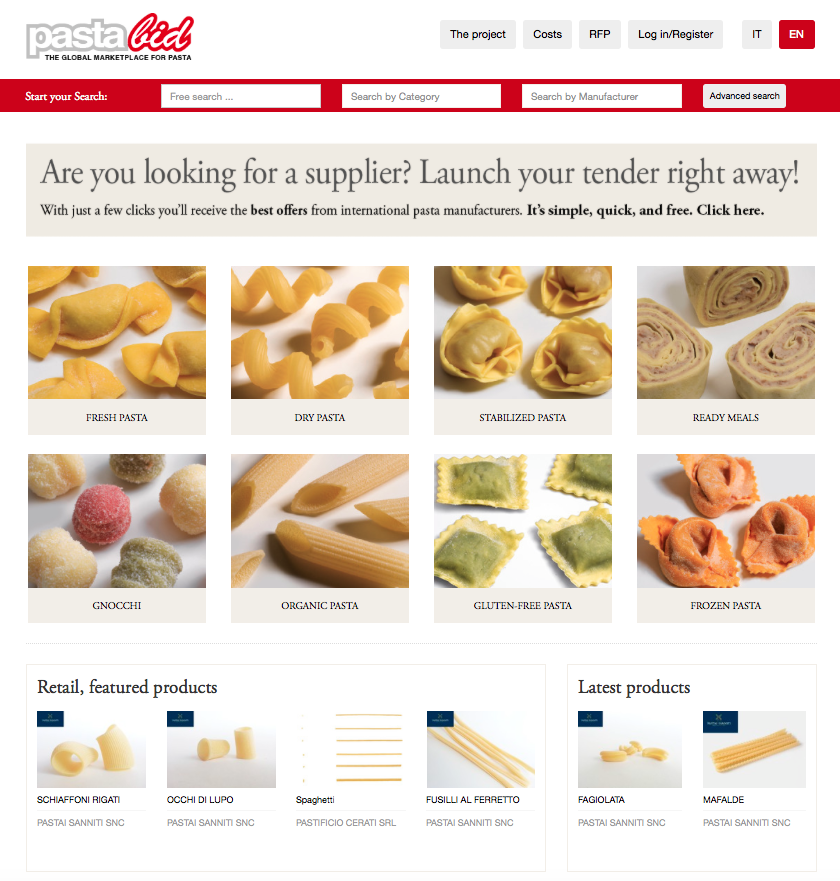 With 72 registered companies—primarily Italian, but there are also firms headquartered in the US, Egypt, Austria, Argentina, Switzerland and Belgium—and 281 references (presented by 34 pasta makers) of a range of categories including fresh pasta and dried pasta, ready-meals and gnocchi, as well as gluten-free, organic and vegan products, thanks to the trust and collaboration of international manufacturers, Pastabid (see Pastabid, the global marketplace for pasta is here, in Pastaria International 4/2015), has succeeded in just a few months (the portal was published in 2015) in attracting a broad range of products. We believe this will grow significantly over the coming year, attracting the attention and interest of international buyers and offering the requisites needed to launch advertising initiatives aimed at professional buyers. This advertising activity could get underway starting this coming spring when we expect a significant increase in the already interesting number of supply contract calls for bid and requests for information and estimates generated by this platform.

The portal, it should be recalled, is designed to bring professional pasta demand and supply together on a world-wide level and, as a result, generate concrete business opportunities for pasta makers. Any pasta maker can register with Pastabid free-of-charge to present its products, receive bid requests for its references and take part in calls for bids.

To register, use this link.

We are still awaiting the official figures, but 2015 should show a +8% increase in turnover compared with 2014. This was made possible by support for Pastaria from a growing number of companies (23) who do business internationally in supplying technologies, ingredients and services for the production of pasta, gnocchi and ready-meals. We would like to note that, without the tangible support of supplier companies who believe and invest in information for professional pasta makers and the process of keeping them up-to-date, Pastaria would be unable to provide its informational tools (digital and print publications, pastaria.it and app) free of charge.